Our drummer Dylan Mac (Heavy D) has been working diligently to ensure that all cymbals are treated with respect and care no matter their mental state or malformations. Two cases in particular stand out. These two crash cymbals (which are on his set) have been abused. The emotional and physical torment they have suffered is apparent from their portraits. Ignoring these petty facts, Dylan uses them every day to remind them how special they truly are. 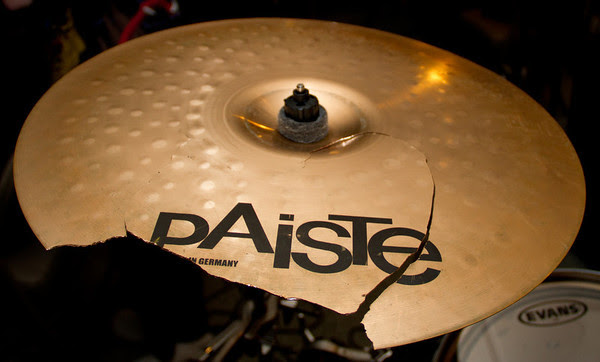 Paiste number one sits on Dylan's left, this little guy is responsible for many of his clanging crashes. During a recent mental breakdown, he inverted and cracked under the pressure. This led to many pieces being lost. His inversion is apparent when looking at the photo, and he is now stubborn whenever turned right side up and right side out, he is upside down in this photo. 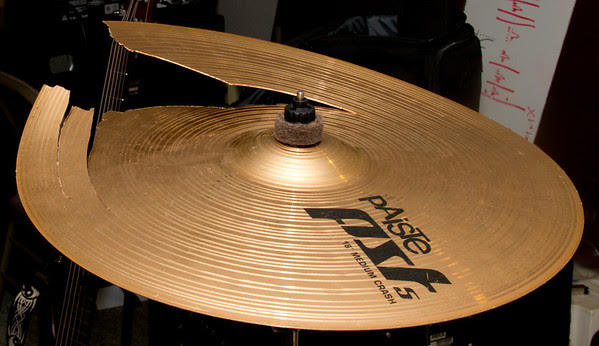 This cymbal sits on Dylan's right. This poor fellow suffers from a severe case of hypochondria and anger issues. This condition has led to some shedding of his own. Unlike his dear friend to his left he not only formed ragged edges but now has springlike arms extending from his surface, which are incredibly unstable and sharp. Whenever Dylan and this cymbal argue, pieces fly off, some of which have hit me while I play not feet away. Many more have hit Dylan.


Even through these trials Dylan has shown these two love. A third cracked cymbal can be found under his Ozone Stack, which also has a prominent role in his playing. We all wish him luck in his attempts to revitalize a friendship with a fourth lost soul, which has laid in his basement collecting tarn. Please consider donating any and all broken, dismembered or emotionally damaged cymbals to Dylan, he will give them the attention they deserve. His love and kindness should be known to all.